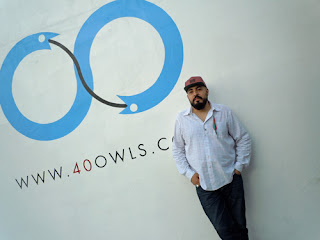 “I live in Chelsea so I go to a lot of galleries, this is some of the most interesting work I’ve seen in a long time. The gallieries have been showing the same things. You go expecting to see something and you see what you expected. This art is different, it’s interesting, it’s pop art but with a lot of other influences.”

The woman who said that to me  was on line for the open bar at the public opening of Distinctive Ethnic Magical Tales, an art show curated, produced and presented by 40 Owls (40Owls.com), formerly Fortoul Presents, a Jersey City based brother team of Gabriel and Isaac Fortoul. 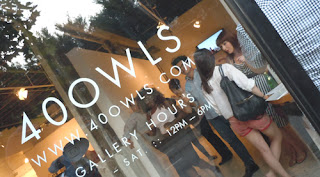 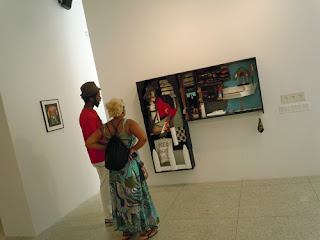 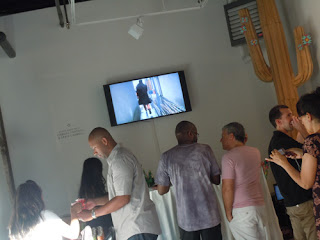 Isaac is an artist – locally famous for the mural on 4th street – and while Gabriel is also an artist, he is now the main force behind the event planning activities of 40 Owls. According to their press release: 40 Owls represents select contemporary artists, curates gallery shows and presents art events throughout the tri-state area.
“Distinctive Ethnic Magical Tales,” is the first 40 Owls event. Gabriel has curating shows since 20004, most recently presenting an exhibit in Tribeca. But the “Distinctive Ethnic Magical Tales” marks a turning point for his impresario instinct. “This is the first time we’ve had full independence, we did everything ourselves and no one looking over our shoulder.”
The 40 Owls Gallery will be located at 150 11th Avenue (21st & 22nd streets) –about a 15 minute walk from the 23rd Street PATH – through July 6th for the Distinctive Ethnic Magical Tales. The weekend prior to the public opening, private viewing openings were held for collectors, gallery agents and other art industry professionals. 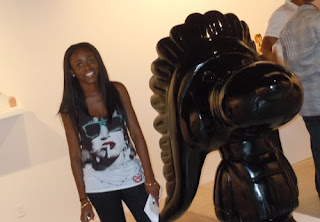 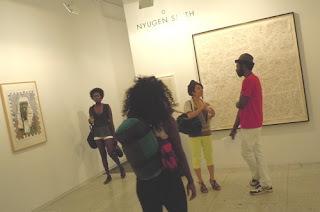 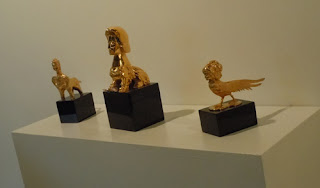 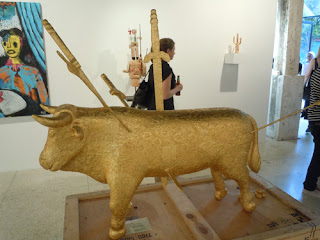 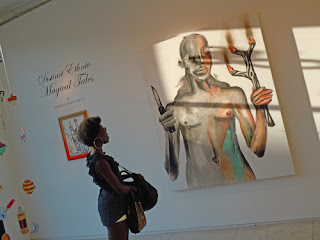 A steady stream of art lovers, collectors, friends, family, other gallery owners and the curious, came through the 40 Owls Galleryfor the Public Opening of the tales. At the bar area, videos of the artists, their work, and the process that went into some of the pieces on view. Three artist were being exhibited, and the flow between the rooms as natural as the sunlight streaming through the expansive front windows; you were never confused as to whose work you were seeing but the flow of space revealed the subtle thematic connections within the work that unified the show.
Distinctive Ethnic Magical Tales featured – Isaac Fortoul, Hector Ruiz and Nyugen Smith– all three have gained critical recognition and collector attention in numerous, high-profile group shows throughout the U.S and are considered some of the most significant and vital, up-and-coming visual voices in today’s art scene.
While the show is a group show in the sense that the work shares many themes, the exhibition is deliberately “Distinct” because the work of each participating artist will be presented clearly and fully. “We’re calling it three solo shows in one exhibit,” explained Gabriel Fortoul. “With some group shows, there can be too many voices and the individual vision of each artist is lost. By presenting them together – in this beautiful, large galley space in what is still the heart of New York’s art scene – we can give the range of their work its proper exposure.”
The artists share a similar background – each is a first generation immigrant, i.e. born to immigrant parents but mostly raised in the U.S. – this is the “Ethnic” part of the exhibit’s title. The multi-cultural tensions of living in the dual and conflicting worlds inform their unique take on the 21st century American melting pot. “How can you be an outsider when it seems everyone is an outsider?” said Gabriel Fortoul. “These artists have an urban perspective, but it is far from a typical or simplistic one. What they have in common is that they were raised in immigrant communities in American cities. They explore issues of identity and the struggle with conformity. But their work is also filled with humor and a sense of discovery.”
Discovery is the “Magic” part of the tales this exhibit tells. “They have the same sense of wonder children have,” explained Gabriel Fortoul. “Even when the work makes provocative social commentary, there is a lack of cynicism. Artists are like children, they see the world anew. The work enables us, the viewer, the one experiencing the work at any given moment, to then see the world with fresh eyes. These artists allow us to rediscover the magic that is in life. These are artists who never lost that wonder, or that hope.” 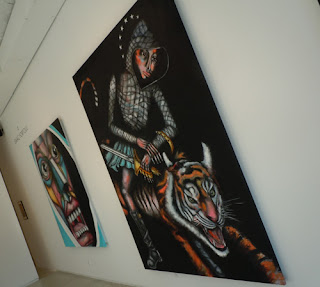 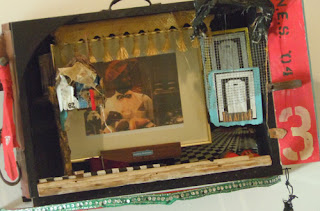 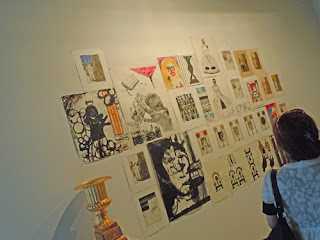 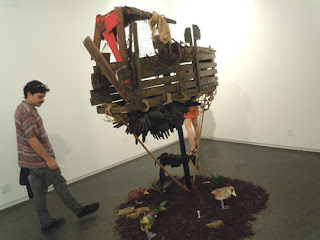 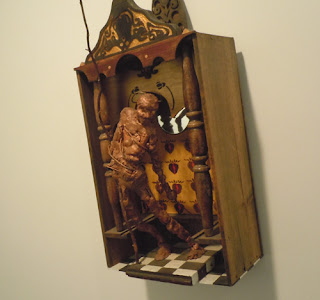 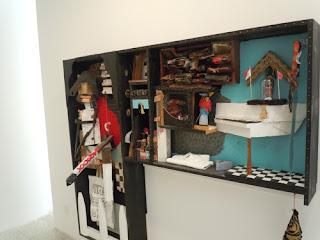 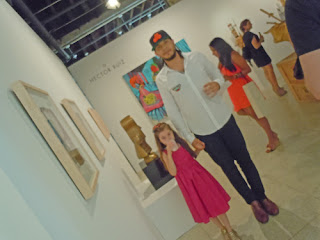 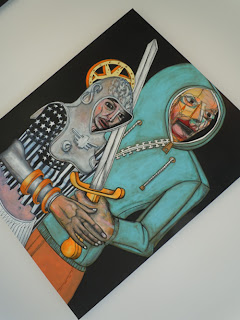 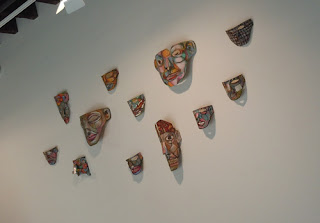 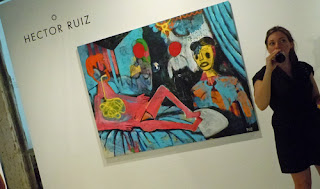 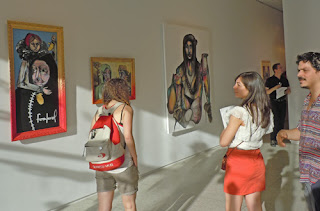 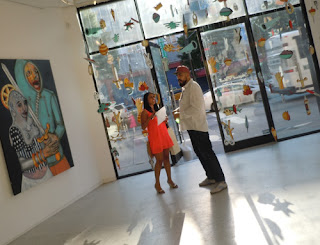 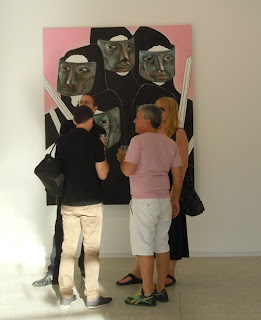 Isaac Fortoul –Columbian descent, raised in Union City, New Jersey and currently residing in Jersey City – will be showing large and medium-sized canvas paintings as well his a distinctive series of Andean-inspired masks. Fortoul’s moody, emotional imagery – much of which is infused with a darkly subtle eroticism – combines elements of primitive art, fine art, graphic art and illustration in its exploration of self, identity, intimacy and the constant struggle against an unfeeling and alienating world.
Hector Ruiz– Mexican American, who grew up in the Southwest and calls Phoenix home --produces controversial pieces whose range of references satirizes our global consumerist culture while at the same time dramatically depicting, and affirming our collective humanity; even when he shows the contradictory role of that humanity within a world where pervasive consumerism is so rampant.For his Magical tales, Ruiz will be showing recent paintings, wood carvings, brass castings, woodblock prints and re-contextualizations of local objects.
Nyugen Smith – of West Indian descent, grew up in Jersey City where he still loves – is the most overtly political of the trio of Tales tellers. A multi-media artist and fearless champion of social justice who uses the colonial history of his West Indian heritage to comment on political struggles past and present, his Tales include sculpture, collage, assemblage of found objects and photography. 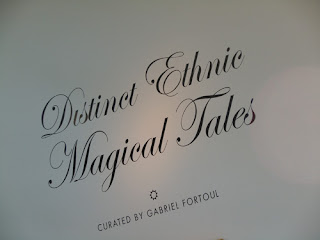