How do you get there from here? In the age before google maps, you would ask your friend this question and they might actually grab a napkin and borrow a pen from your waitress and draw a map. They don’t just know how to get there, they remember how to get there. The map they draw represents the memory they are now sharing with you. It becomes how you visualize their memory and eventually will be your memory. 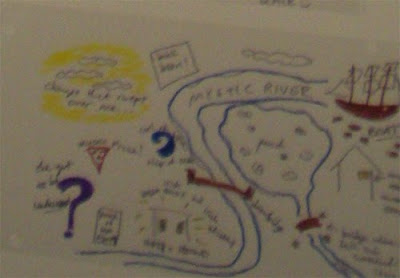 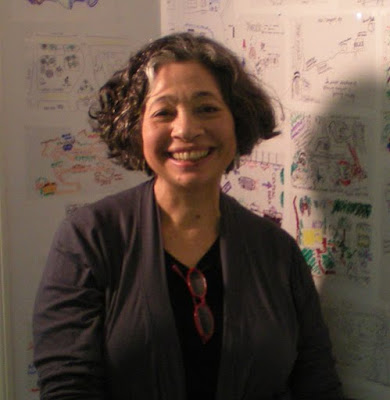 “Memory Maps” is the cleverly sentimental show at Gaia Studios (http://www.gaiastudio.org/) on Third Street that explores the fragile yet universal nature of memory. The project is by Aileen Bassis (http://www.aileenbassis.com/) and started as a public arts project in June, where according to a press release, the artist “made a thin wire web that attached to two trees and invited people to draw a map of a place they remember on clear acetate and wired the maps onto the web.” The public cartography inauguration took place at a NYC public art event, and dozens of maps were drawn. Aileen photographed participations in the “Act of Remembering,” a phrase I find extremely endearing. 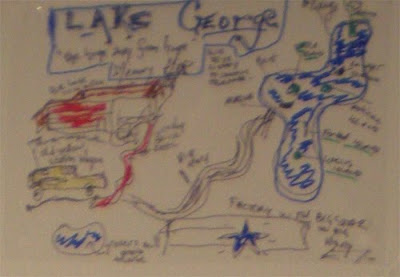 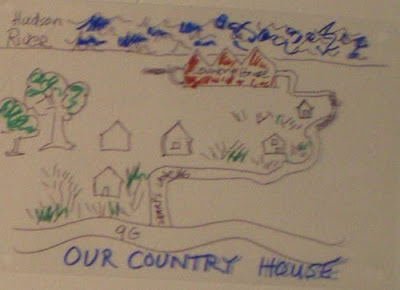 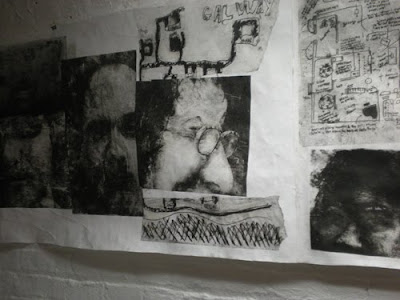 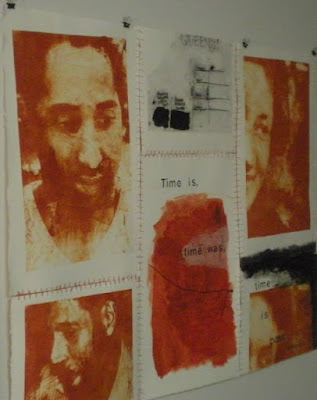 In the gallery space, the photographs were featured on wide sheets of paper, the maps aligned a corner. I wasn’t able to make the connection between the hand drawn maps and the Act of Remembering (as opposed to remembrance) before talking to the artist. It wasn’t the fault of the pictures, which were looked like un-posed portraits of regular folk, but that the act of remembrance is not a specifically identifiable visage. The connection probably would have dawned on me eventually. Another component of the project featuring quotes on the nature memory by philosophers, such as Aristotle, St. Augustine and Sartre was not displayed, apparently due to space restrictions. Maybe its inclusion in the next iteration of Memory Maps will provide additional connective tissue.

The photos documenting active recollection were printed on a scroll spanning a wall of the gallery. The reproduction technique used was similar to lithography. On another wall, was another photo collage of the act of remembering, but instead of a scroll the images were printed on large panels and the panels stitched together with thick thread, which seemed to mimic the nature of our memories, how one leads to another, how drawing a map inspires recollections of your time in that place, how a memory of place leads to but is different from the subsequent thought, idea or insight.

Maybe it’s this—our collective memories, or how my memory of this place gives you this map and that map you follow creating your own memory is the connection we all share. Maybe memories are the seams that bind us together. 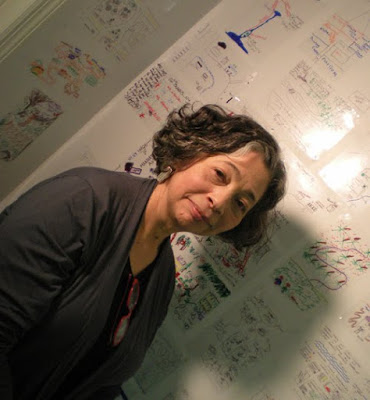 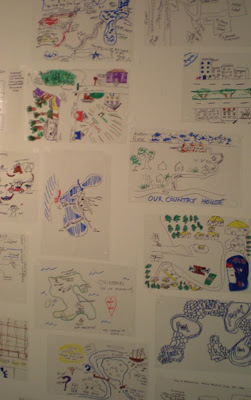 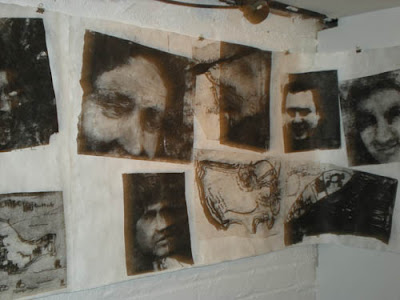 The core of the show was the hand drawn maps. Islands, Lake George, neighborhood, a variety of places, some more intricate than others—and of various spaces, for instance one seemed like a block and a few streets, the other what I believe was the western portion of eastern Europe. The drawings were personal, their sentimentality appealing, and the obvious and intentional amateurishness very charming. Yet, the intensely subjective perspectives of each drawing melted when viewed as a whole.

The specific location or size of the space depicted in the map was really about consciousness—and the role personal and collective memory plays in creating consciousness—not geography. Memories connect us more than place, space or time. 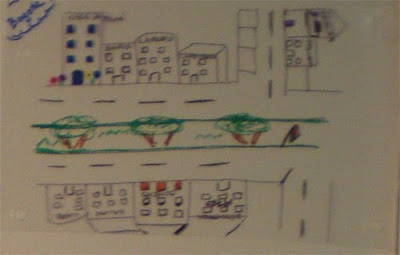 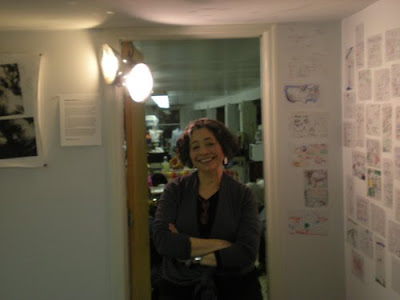 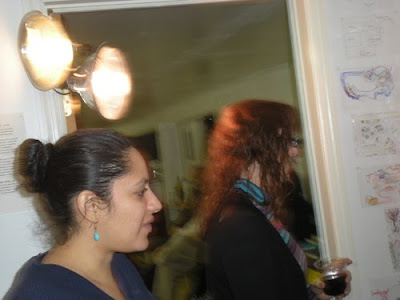 A fascinating and provocative show filled with ideas subtle and multi-layered. The work is ongoing so I suspect the next installation will be even more robust. The space itself was really cool. It’s the basement of an apartment building, but I was told it was a high basement. I have no idea what that means exactly, but you walked down a few steps to enter the space yet it wasn’t entirely below street level. It was a little below and a little above.

The front portion, the foray if you will, was the gallery, with white walls and some makeshift spotlights. Through a doorway was the studio portion. People were sitting around, conversing with each other and welcoming visitors.

A folding table provided the setting for the spread of wine, water, soda and snacks that are the traditional signs of a J.C. Friday event. A few paintings and other artworks occupied some of the corners of the studio, as well as a printing press and other work title. It was very clean and orderly and you get a real productive vibe. I liked it a lot.

Gaia, named after the Greek Goddess of the Earth (also the mother of Uranus, who together begat Cyclops), is a collective of women artists, where as individuals and as a group, they engender a creative atmosphere and increase representation of women in the arts. They also get involved with politics and activism. They think globally and act locally. This downtown themyscira is new to me. It radiates empowerment of artists and encouragement of ideas and work. 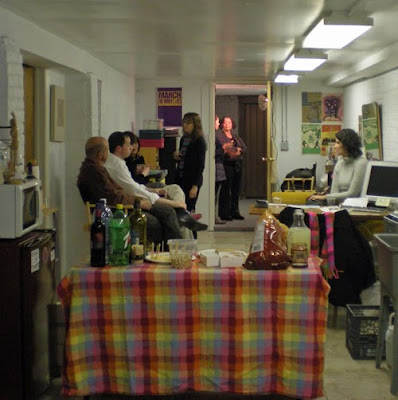 The organization seems to prefer the _gaia as opposed to Gaia. Since I do my own copy editing and I prefer not to vex the evil goddess HTML (not to mention the avoiding the wrath of the she-demon Spell Check), I didn’t follow this idosyncratic, post-internet, type meets text mashup of a name. Besides, the underscore was invented by Geeks not Greeks! As recompense, here’s their mission statement: _gaia’s mission remains as a collective of women, for women, for the making of textiles, clothing, printmaking, painting, architecture, music, film, photography, science, the performing arts, writing, environmental, social and political activism: all things which color the lives of the women involved. We actively promote and support the work of local women artists while developing programming to reach out to and help emerging artists in need of studio space, facilities and resources. In our pursuit of awareness we also concentrate on activism, from issues in the local community to global issues affecting the lives of women.
Visit: www.aileenbassis.com
Visit: www.gaiastudio.org 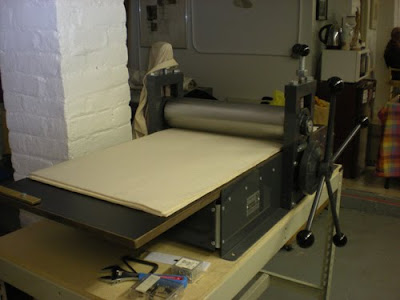