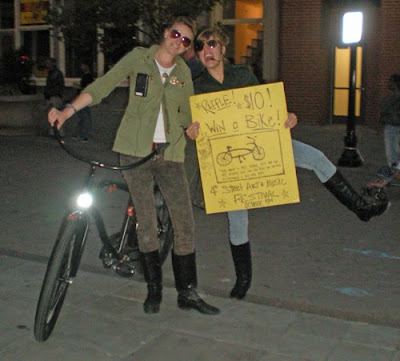 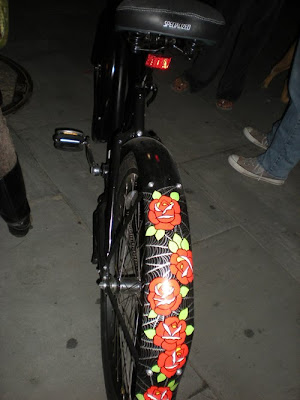 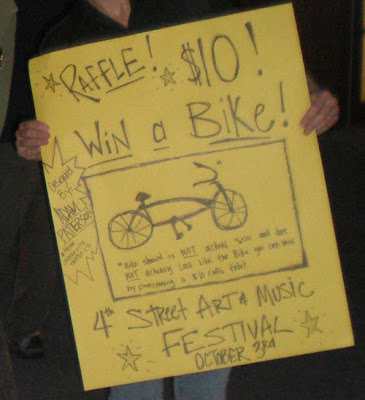 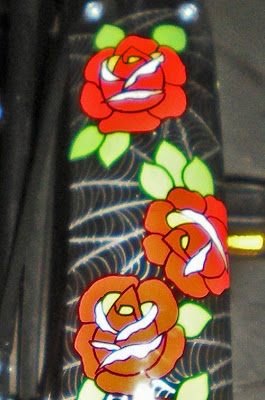 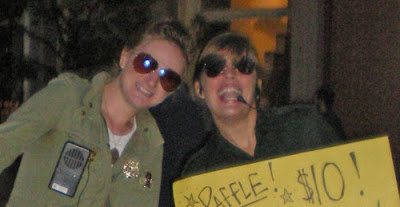 Energetic and engaging, Alissa Ahberg (on the left, she’s blonde) and Sarah Shields were hawking raffle tickets at the second-to-last Groove on Grove for a bicycle in support of the 4th Street Art & Music Festival on October 3rd in Jersey City. The event, the block-party component mid-way through that weekend’s J.C. Artist Studio Tour, will feature music and entertainment. “There’s going to be two stages,” said Sarah. “A lot of bands and sketch comedy, we’re going to be the hosts.”

“We’re EMCEES for the whole event,” said Allissa. “We’ll do sketch-comedy too!”
Allissa and Sarah are Trip-And-Fall-Productions. According to the mission statement on their website: “Based out of Jersey City, Trip-And-Fall-Productions was born from the desire to create feisty and shameless (and slightly humiliating) comedy, including: original work, sketch comedy, a mediocre website, tissue paper flowers, excessive blogging, and improv. We hope to eventually provide Jersey City (when we actually have money) with a fresh and accessible venue for local artists, goofballs, and just about anyone really- but mostly just ourselves. For now, just check us out. We do stuff all the time, every time. Believe in yourself and follow your dreams!”
The website is genuinely amusing and these women have a lot of appeal. “Believe in yourself and follow your dreams!” That’s a motto I whole heartedly support. And let’s face it, we can all use some laughs.
And they appear to have the right attitude for how we live now: “I just lost my job which means we’re both unemployed,” said Allissa. “So now, we can fully dedicate ourselves to comedy!”
Raffle tickets are still on sale and only ten bucks. It’s a good cause. The sturdy bicycle features artwork by Adam Paterson, illustrator/tattoo artist and proprietor of Jersey City Tattoo. visit: www.jerseycitytattoo.com
I don’t know about the shameless part, but Allissa and Sarah are certainly feisty. They wore some faux law enforcement badges, large aviator sunglasses and serious looking motorcycle boots, but so many folks were trying to get tickets, I couldn’t get a coherent explanation for their footwear and accessory choices. Maybe they wanted emblems to indicate that there’s a new comedy law in town. The Groove on Grove band was getting louder, people were pushing me out of the way to speak to the duo. As I waved goodbye, Allissa shouted towards me, “We’re looking for gigs!”
For more information on the 4th street Festival, Visit: www.myspace.com/4thstreetart
For the latest on Trip-And-Fall-Productions Visit: tripandfallproductions.wordpress.com
For Raffle Tickets or to book Trip-and-Fall, Contact: tripandfallproductions@gmail.com
Posted by Mr. Tim Hrk at 6:32 AM