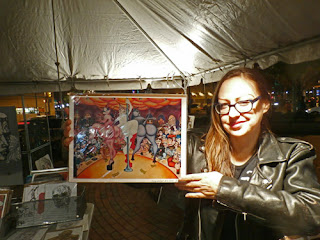 Stephanie Riggi made a rare appearance at Creative Grove, a chance to meet the artist and snag some affordable prints of her ultra-radiant illustrations. The prints featured her stock-in-trade depictions of pop culture icons, ranging from John Lennon to John Waters alongside some of her idiosyncratic dreamscapes. She’s a local celebrity of sorts, her art seems everywhere. She’s a favorite feature among the curator set. I have seen and admired it at a few shows, such as Night Gallery exhibit at the Fish with Braids Gallery. But I’ve been a fan from afar, I’ve never met her until I recognized the art this slightly chilly Autumn evening.


Her pallet is colorful and beyond-bright, nearly neon but while most artists who dwell in Day-Glo glorify artifice, Riga discovers humanity. She has an obsession with John Waters and especially Devine, the famously obese cross-dressing actor, recreating what seems to be famous images. I love the way you see the Warhol image obsession, yet the folds of fat on his chin and jowls remind you of the lonely, misunderstood blue collar boy Waters turned into an icon. 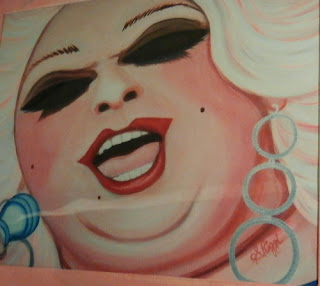 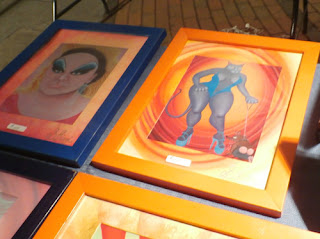 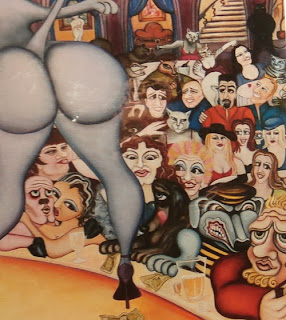 I was most taken with her anthropomorphic felines, bawdy and erotic, burlesque Mae West types, with pronounced, Rubenesque buttocks, an R. Crumb naturalism to be sure, but also the bright colors seem closer to mainstream animation imagery. I loved this one where the sexy cats are on stage, some sort of imagined NC-17 stage burlesque show, risqué but getting out of hand while in the crowd are human beings – human males at least – and other human size felines and you see shock, awe and arousal mounting in the audience. The painting depicts the moment before inter-species sexual bedlam broke out. Should we call the vice squad now or should we have some fun first?


The original of this painting Stephanie insists will never be for sale. It is part of her permanent collection. In fact, many of the prints she was selling are copies of originals no longer available. They’re exclusive and are. 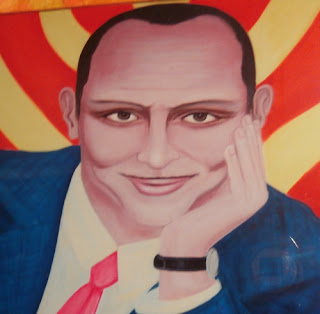 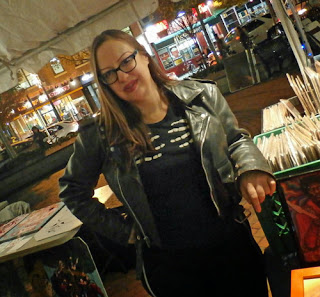 Stephanie applies a unique illustrative ability, rare outside the realm of commercial graphics, to a acrylic and oil painting. A colorful canvas guided by a more colorful imagination, always ready to surprise. 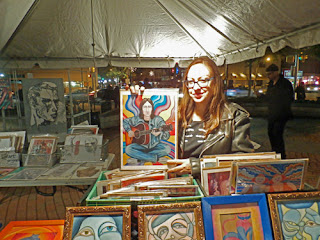