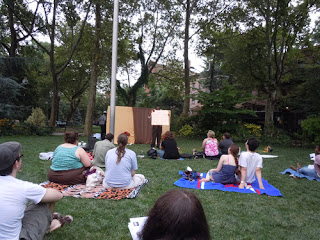 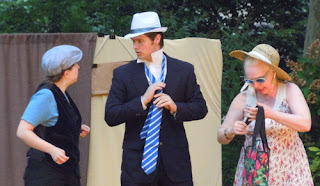 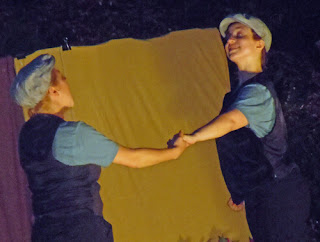 I’m not as inclined towards the comedies when it comes to my Bardolatry. Comedy is more time sensitive than drama and it is the rare comedic work (Duck Soup, The Big Lebowski) that ages well.


But that’s just an opinion, and I’d rather have my opinions challenged and if need be changed than blindly stick to them. The Hudson Shakespeare Company’s version of The Comedy of Errors has prompted me to revise my previously held perceptions of this play.


Comedy is not just about what’s funny or the immediate laugh. I love Shakespeare and so even if I am not as excited about the comedies as I am about the tragedies, I’m still going to take in the Bard any chance I get.


The Comedy of Errors is the second of Shakespeare play of the 2012 Summer Theatre season at Van Vorst Park performed by The Hudson Shakespeare Company.  Tradition tells us that The Comedy of Errors was the first play Shakespeare wrote, but many scholars now doubt this long held claim.  The  polished nature of the often lyrical dialog, the concise plot and sharply depicted action – the play takes place within the course of a single day, making it one of the most “real time” of the canon – some scholars suggest are clues that the play was probably more a product of an experienced playwright rather than a neophyte. The version we know today was likely finalized later in his career by a more experienced stage master.


The Hudson players amp up the action of this play. The Comedy of Errors is prototypical farce – linked episodes all revolving around mistake identity – and the Van Vorst performance sustained an accelerated tempo, which of course is not just how farce should always be played but, the directorial decision enhanced the relentless word play and puns, eliminating the sometimes tinny sound this comedy style can possess to 21st century ears.  The direction gave homage to Warner Brothers Cartoon –Michael Higgins, who was in the role of Othellolast month, directed and he personally introduced the proceedings by holding up Title Cards, a trope utilized by classic Looney Tunes animation. The play ended by David Rosenberg, who also took the minor role of “officer,” doing a credible Porky Pig stammer for Th-th-th-th that’s all Folks, his head poking through the backdrop curtains.


Higgins, according to the Hudson Shakespeare Company’s website, choreographs the company’s sword fighting so it’s not surprising that he emphasized  the physicality within The Comedy of Errors  Slapstick abounds, pratfalls and exaggerated movements throughout. The actors were having a good – at the end of the show on a mildly humid evening, perspiration soaked through the wardrobe – if ultimately exhausting time. They were great fun to watch as they sprinted through the succession of embarrassments, travesties, and false assumptions.


The Comedy of Errors requires a greater suspension of disbelief than other Shakespeare’s comedies, and even then going ons – the errors of mistaken identity – can be confusing.


Egeon (Thomas Cox), a merchant from Syracuse, enters Ephesus and is promptly arrested because any Syracusan in the city will be executed unless he pays a ransom. Egeon then explains the basic premise of the plot – he is searching for his identical twins and their identical twin slaves – both sets are identically named as well: Antipholus the master, Dromio the slave – a shipwreck years ago separated the family.


The Duke (Eddy Cara), while moved by the merchant’s tale of woe, still  insists he must pay the ransom or die. Meanwhile, back at the tangle of subplots – that very same day from Syracuse arrives Antipholus (Richard Rehese) and  Dromio (Melissa Meli). Antipholus of Syracuse is searching for his long lost twin brother. Unbeknownst to these two, Antiphous of Ephesus (Rich Wisneski) and Dromio (Larua Mae Baker), live and are well known in the city, and it is the local merchants, jewelers, courtesans not to mention the wife of Antiphous of Ephesus’s wife, Adriana (Vanessa Wendt) and her sister, Luciana (Chelsea Rowe), all mistake the Syracuse pair for the hometown pair. Thus farce unfolds, concluding with the entire cast gathered around a priory where one on the Antipholus’s seeks sanctuary. The abbess reveals her self to be the mother of the sons, the duke pardons Egeon, order is restored. 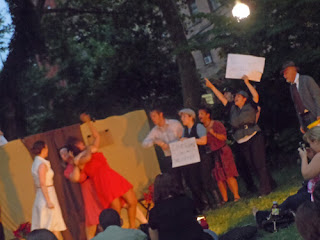 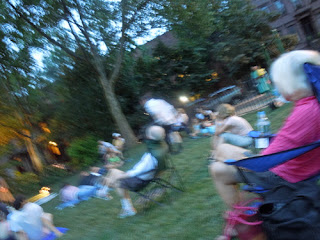 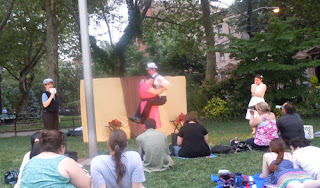 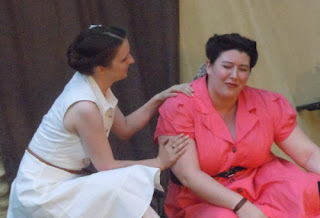 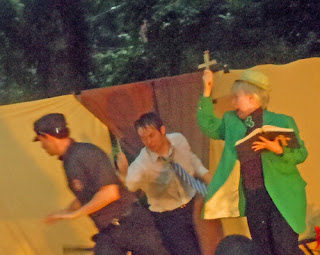 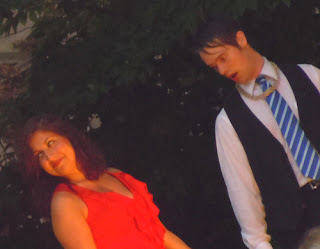 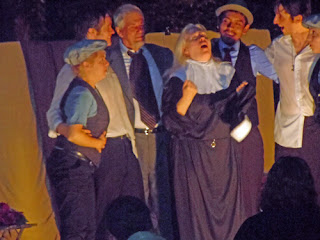 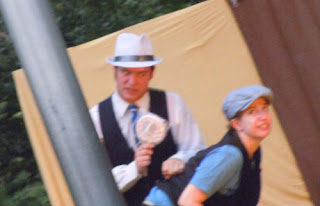 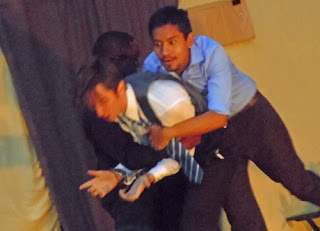 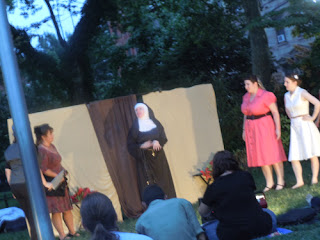 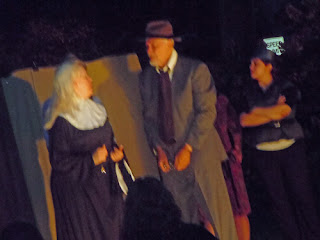 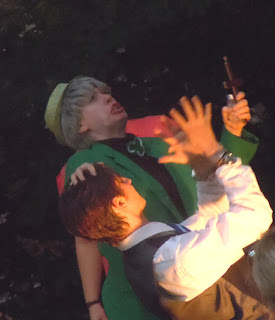 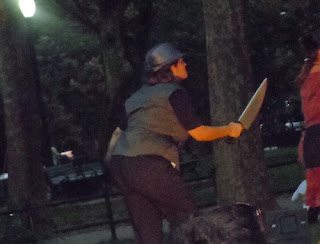 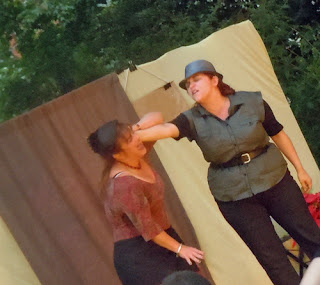 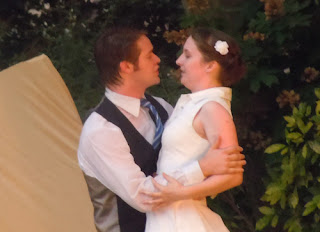 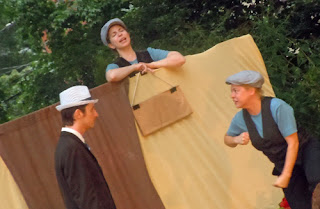 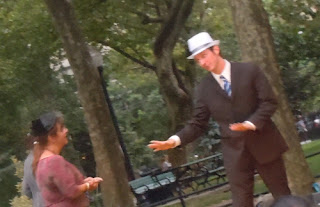 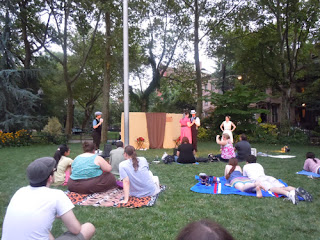 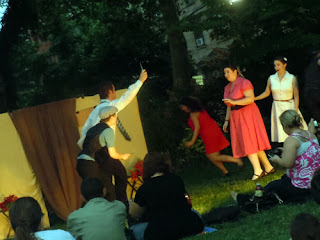 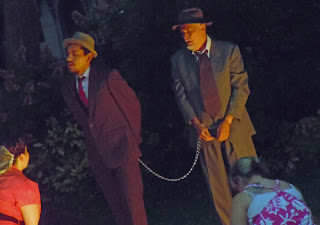 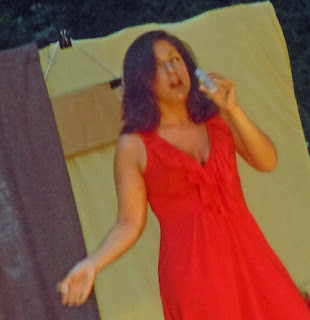 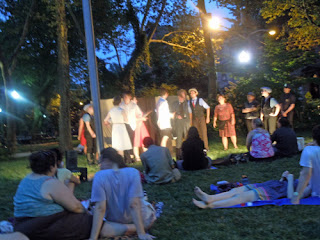 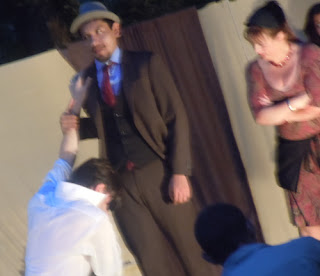 Harold Bloom says of The Comedy of Errors: “It is a play in which no one, not even the audience, can be permitted to get matters right until the very end, when the two sets of twins stand side by side. Shakespeare gives the audience no hint that the Ephesian Abbess is the lost mother of the Antipholuses until she chooses to declare herself. We can wonder, if we want to, why she has been in Ephesus for twenty three years without declaring herself to her son who dwells there, but that would be as irrelevant as wondering how and why the two sets of twins happen to be dressed identically on the day the boys from Syracuse arrive. Such peculiarities are the given in The Comedy of Errors, where demarcations between the improbable and the impossible become very ghostly.”

By introducing so many implausibilities in The Comedy of Errors, Shakespeare depicts the anarchy inherent in the human condition. Roles are reversed, expectations thwarted and life becomes upheaval. The stranger from Syracuse is considered a familiar by the wife of the brother he doesn’t know, a jeweler and a courtesan, while the familiar citizen of the city is accused of theft and madness is sent to an exorcist and eventually jailed. The direction of the Van Vorst performance, with its emphasis on accelerated antics and exaggerated physical comedy, underscores the anarchy that civilization only intermittently succeeds in containing and is also behind the uncertainty that disrupts individual lives and our relationships with others. Life is an unstable business, and identity is always subject to dispute. When no one knows who you really are can you be sure that you know yourself?


The madcap became mayhem as the play sped towards the inevitable resolution. At one point the entire cast chased each other around the backdrop. I’m not sure what matter of plot was served, but I think at least one of the pair of twins might have viewed their counterpart, thus straying from the logic of reveal at the resolution, but it was so absurd and funny, this technicality only occurred to me later. Egeon, who is supposed to be imprisoned, wandered into the audience and panhandled for ransom money. This brash interlude had nothing to do with the play and everything to do with wallowing in pure, unadulterated silliness. As one explosion of chaos followed another on the Van Vorst lawn, the Marx Brothers – the comedy kings of anarchy, beloved by Surrealists and Dadaists – came to mind, themselves a major influence on the Warner Brother’s Looney Tunes.


Then there was a climatic piece of interactive, guerrilla theater. Rich Wisneski’s Antipholous utilized the lawn in the final act, as he moved throughout the crowd, never breaking character as he pled for his life after being sentence to death by the Duke. He even jumped over the fence into the nearby playground where kids were playing on the swing. Sometimes these open air productions can seem a detriment, but this actor found a way to turn the non-theater drawback to his comedic advantage.


The Comedy of Errors finally belongs to the two Dromios, here played by the same duo of Desdemona and her handmaiden Emilia that starred in the Hudson’s Players Othello, only a few weeks ago. The Hudson Shakespeare Company seems especially astute with their innovative casting. By having two women play not just the male roles, but actually are “male,” the cross dressing implications add a layer of Chasing Amy to some of the bawdier scenes, especially the classic – perhaps the most famous dialog exchange in the play – where the Syrcausan Dromio salaciously compares the girth of an overweight wench (the girlfriend of the Ephesian Dromio) to the entire planet.


“Sry Ant: In what part of her body stands Ireland/Sry. Dro: Marry, Sir, in her buttocks, I found it out by the bogs.”


The two Dromios end the play and these two actresses still have the same chemistry exhibited in Othello into the farce. Even though they only meet for a few lines of dialog, they tend to reflect each other because they both take the brunt of the physical violence, usually from their masters (the Syr. Dro was hilariously spanked with a lollipop). Eph Droi ends the play: “we came into the world like brother and brother. And now lets go hand in hand, not one before the other.”


The Hudson Shakespeare Company set the play in the mid-20th century, and supposedly Shakespeare sets the action in Ancient Greece, although even that “when”is unclear because there are references to Christianity throughout (St. Paul has an epistle to the Ephesians). Bloom points out that Ephesas is obviously the London contemporary to Shakespeare.


The Elizabethan era saw the rise of the merchant class, the beginnings of capitalism. The Comedy of Errors is a commentary on how money is now a determining factor over lives and relationships. The neglectful father is a merchant, the city of Ephesus levees fines again those from Syracuse, and most of the mistaken identity incidents revolve around issues of commerce. The two Dromios express a love to each other that the two Antipholuses obviously do not feel, the actresses not only make us believe the veracity of their feelings upon their reunion, but the hand-in-hand/not one before the other, personified the solidarity of the working class, a distinct contrast to the relationships among the merchant class. As the two actresses executed a perfect pratfall to end the play, I felt that the Dromios linked the Occupy Wall Street Movement to us groundlings. The 99 % experiences the same brotherhood (or sisterhood) of the Dromios. The populism was palatable. We’re equals, liberated and together.


That’s the thing with Shakespeare, he will always surprise you. The Hudson Shakespeare Company discovered something I never quite realized before about The Comedy of Errors. Farce is subversive. 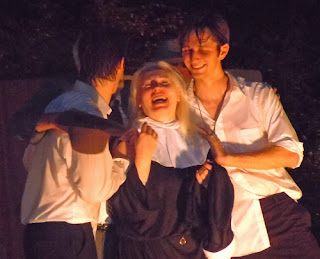 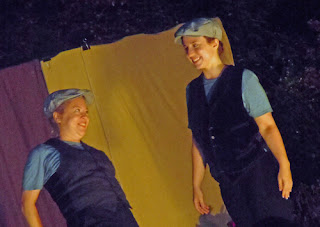