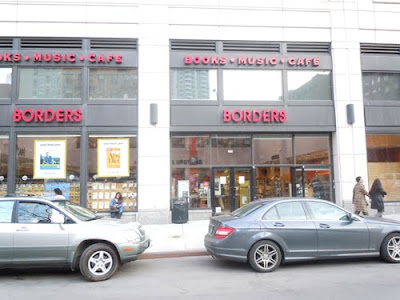 Borders is bankrupt. Initially, some of their stores are closing although book industry watchers feel it is just a matter of time for all to go defunct.

I went to the store on 2nd Avenue by 32nd Street the day after I heard the news. I used to go there often, when I started my current day job gig, because the office was way over there on the East Side. In retrospect, I probably went to Barnes & Noble more, even though they were not as close to where I spent many days – and there was one at the Newport Mall and Hoboken. Back then, at least... only a few years ago but now far, far away.

I would have gone to independent bookstores, but that era has long passed. I guess they are now the brontosaurus and the chains are wooly mammoths. The Ice Age is upon us, make no mistake.

Borders was and is, never as good a bookstore as Barnes & Noble. I used to go the flagship B&N store on Fifth Avenue before it became a chain. They always had a competitive selection of books, and now music and DVDs; so even though I try not to shop at chains, B&N has been a notable exception.

B&N was always way, way better than Borders. But, during my brief Border days, I remember getting “After Secession: Jefferson Davis & The Failure of Confederate Nationalism” – I have an inexplicable interest in Jefferson Davis; and the Best of Sugar Boy Crawford, a New Orleans R&B cat who wrote Jockomo, the original version of Iko Iko. Come to think of it, I special ordered both of those, so it was not like their inventory was any great shakes. The special ordering was easy. Anyway, the office eventually moved right around the corner from a B&N and I rarely made it down to Kips Bay (or is this Murray Hill). 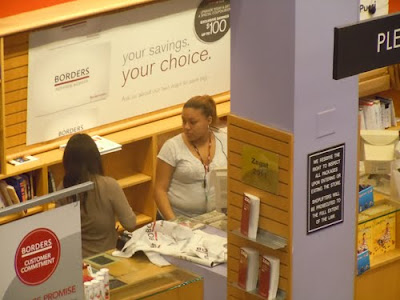 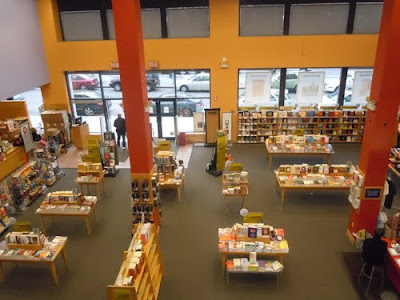 “We’re going to have a liquidation sale, sell everything down to the fixtures. It will start in a day or two. It will last until everything is gone.”

GOB they call it retailing. Going out of Business.

"I’m sorry if you are losing your job,” I said.

She was young. Adulthood is still new and there are more disappointments ahead. Let’s hope they don’t outnumber the good times and splendor.

“I am,” she said, resigned to her immediate future. “But that’s what unemployment is for.”

Probably the last time you’ll ever work in a bookstore,” I said.

I agreed. She was a book lover, a reader, as am I. That means a bookstore frequenter. She was likely one before she got this job.

The atmosphere was quiet, subdued. A lot of moms with their toddlers were there. The store has a big children’s department, a faux Starbucks. Bookstores, especially these super store things, were designed to be a destination, that’s why you can hang out there, get coffee. The atmosphere can be relaxed.

As such, they become a meeting place and in essence, a place where the community manifests itself. But you know there can be profit in community but rarely is there enough profit to satiate stock holders.

Alas, times are changing and I fear that browsing a bookstore, still one of my favorite pastimes, is a thing of the past. 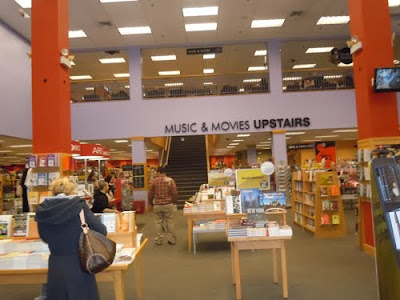 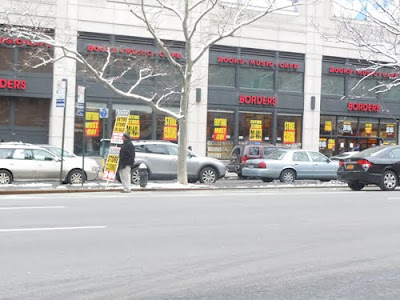 So, I came back on Monday for the actual sale. Only 20 percent off, not that great a sale really.

I bought a newly translated Tolstoy novella, How We Live Now, novel I always wanted to get through and a novel by William Trevor, which I am unfamiliar with. The selection sucked, because at Borders it always kind of did, but I wanted something to remember the store by. I took a few pictures and a corporate manager came up to me and he made me delete the pictures of inside the store. It was uncomfortable. He would have to ask me to leave if I didn’t.

I could have argued, but what the heck, didn’t seem worth it. I just wanted the contrast, of the inviting community atmosphere when it was a going concern alongside the GOB sale, customers placed into the position of being jackals shredding a carcass and the cashiers stoically doing their tedious tasks for the last time. So I bought my books – there was a real long line – the coporate wasn’t nasty, just a douche bag. At check out, they had to put a line through the UPC on the back of the book, explaining all sales are final.

Then I took a picture I was not allowed to take, waved at the manager. Borders left a sour taste as a parting gift. I hope the paychecks given to the employees who obviously enjoyed working there do not bounce. 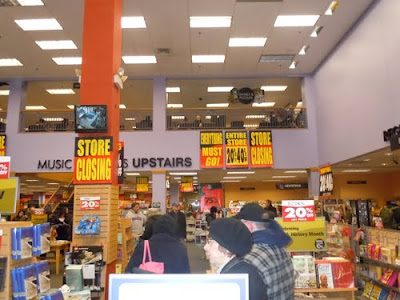