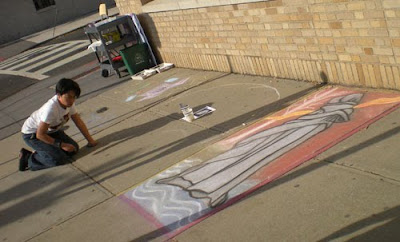 Since when did chalk become a verb? I guess I’ve been out of hopscotch circles too long. Nonetheless, even though some artists are in full gripe promoting their treatment by the Jersey City Museum, younger and exuberantartists recognize a fun opportunity when they see one.

On Saturday the Jersey City Museum sponsored Chalk the Walk, were everyone was invited to make art on the sidewalk with chalk. So much of life is momentary and temporary, it seems the chalk medium not only represents that, but actually embodies it. How long is a moment? What is the extent of temporary? These words are concepts, not specific terms, not like the 60 seconds of a minute. Chalk art defines the aesthetic concept as beyond our control. Beauty that lasts until the next rain.

Children and some parents came and decorated the concrete. It was a familyactivity day; associate museum going with fun, start the kids off right. I am tempted to come up with sarcasm about the troubled JCM, but dang, chalking the walk looked like fun. 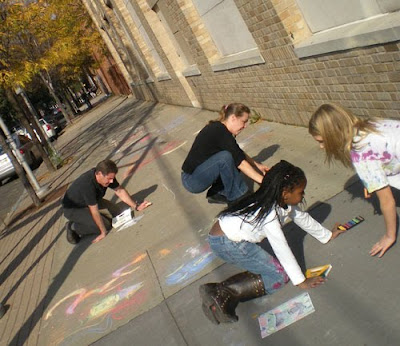 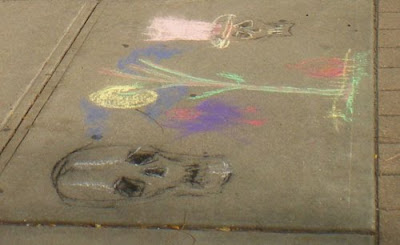 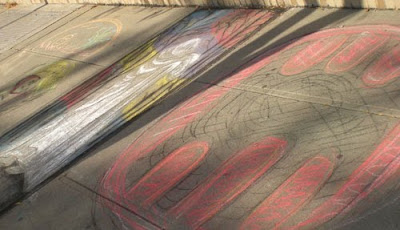 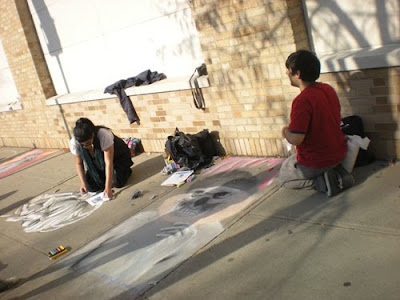 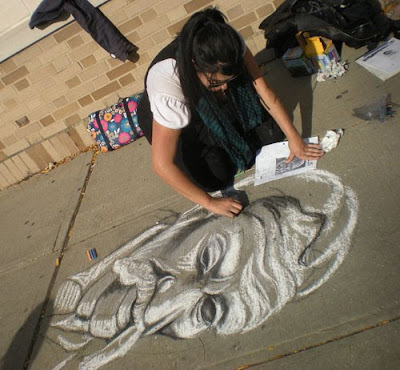 Some impressive talent was on display at sidewalk level.

Judge, we have some ringers here.

The Art & Design Association of New Jersey City University (Jersey City State College for those who remember the night Mondale lost) were represented. "We were worried we would be too late to draw,” said Stephanie, an illustrator. “We came here straight from the NJCU Open House.” 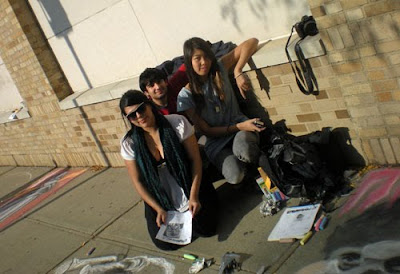 Stephanie was with Phil, a Printmaking major and Padina, a Fine Arts Major. Illustrator, Print Maker, and a Fine Artist (or is that Fine Arts Artist)? Apparently the ADA (“We call ourselves the ADA,” I was told) is an association for all artists, regardless of specialty (or as their Facebook page says, specialization).

All visual artists welcomed. Can’t we all draw along?

Their enthusiasm was as bright as the sunshine. I used the word exuberance, and a lot of exuberance is due to youth.

Just because exuberance is inherent in youth, doesn’t mean olderfolks—especially older artists—should use age as an excuse for abandoning exuberance. Excuberance is worth the effort.

Yes, we should all encourage creativity among the young, but some of the older artists in town, who are long out of school, who are well into creating their body of work, might want to remember this exuberance. I guess they are all too busy to draw on the sidewalk just for the sake of drawing on the sidewalk on a sunny autumn afternoon.

October in Jersey City begins with a city-wide art celebration.The studio tour and the 4th street fest were fantastic this year. I had agood time, got a couple of good blogs. The art community here is better organized and more unified than ever. Their DIY aesthetic is impressive. There is no lack of enthusiasm. Lots of new ideas being acted upon. But it seems that exuberance is short-lived. By mid-October, it's back to the day job.

We live in a cynical age, and it seems society is hell bent on dictating that cynicism must come with adulthood and adult responsibilities. Bullshit. Cynicism, especially the reflexive kind you get after say age 30, is such a drag, it’s so moldy.

Talking to these young artists, new to adulthood and ready to dedicate their lives to self expression and the realization of their talent, just got me to thinking. We should all not just remember exuberance, but tap into it more often than we do.