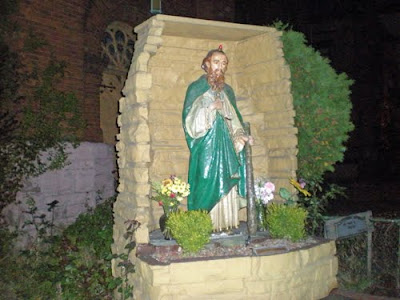 I posted a piece on a hidden part of Jersey City, the nine-day event among Catholics of the Saint Jude Novena, which has been part of the fabric of our town since the 1930s. I decided to pay a visit to the Saint Jude statue at the old Saint Lucy’s church, over on 15th Street & Grove, past the entrance to the Holland Tunnel, the border-town section (the border to Hoboken) of northeast J.C. The church was shut down in the mid-80s, although some of the buildings house the Saint Lucy’s homeless shelter. The Saint Jude statue has obviously been kept up, it looked recently cleaned when I was there, a well tended garden and candles, all evidence that someone is still praying to Saint Jude here. 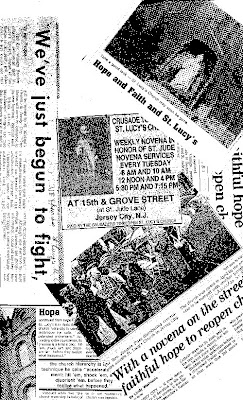 One of my favorite pastimes is going to the New Jersey Historic Room at the main branch of the Jersey City museum, on Jersey Avenue, where I did some research on the Saint Lucy controversy. I had heard stories from some of our old timers. Catholic Churches and other church properties are actually owned by the Archdioceses, not the individual parishes. The church was built in 1884 and included a school, rectory and convent but by the 1980s, the school was closed, the church was in disrepair and the only service being held there was the Saint Jude novena on Tuesdays, which according to one story began in 1933. When the archdioceses made the decision to close the church, it was no longer a parish and in fact was being administered by Father Hugh V. Fitzgerald, then pastor of Saint Michael’s church (Father Fitz passed away in 1999 and the block of 9th street where the church is located was renamed Father Fitzgerald Way). The shrine was moved on April 6th, 1986 and a long outcry ensued. I spoke to the musical minister, which means she plays the organ during mass, at the time and she said things were so heated that the police insisted on giving her an escort to the new church. An organization was formed, the “Crusade to Save St. Lucy’s Shrine of St. Jude Committee,” and although unsuccessful, a city councilmen was a member and it certainly caused a lot of controversy. A non-archdioceses priest, who was from a church in Bombay (yes, Bombay, INDIA!) began to hold illicit St. Jude Services at this statute, attended by reports of “hundreds” of former parishioners. How long this went on, for or when it stopped, I can’t seem to determine. 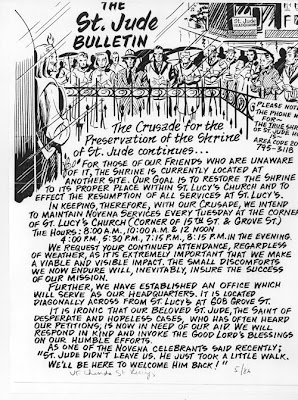 An original flier from the “Crusade to Save St. Lucy’s Shrine of St. Jude Committee.” Notice the date, 5/86—the shrine was moved in April of that year. The valiant effort wants to Restore all Services to Saint Lucy’s. I wonder if this meant mass and other parish services, because at the time the church was only offering the perpetual novena to Saint Jude. I love the language, “The True Shrine of Saint Jude H.Q.” 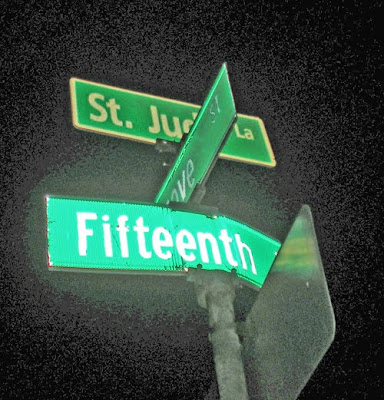 I’ve been to this statue a couple of times, but not very often. But this was the first time I noticed the street sign, St. Jude Lane. I usually notice these sort of things. But I don’t know when it was erected. These signs, which denote that a portion of a street has been renamed, not the entire street, are made by proclamation of the city government. Basically there’s an official proclamation, a street sign paid for and erected, often accompanied by a ceremony. I went down to the City Hall to see what I could find out. They had no record of this sign, but to be fair, there is a gap from the late 70s to the early 90s, transfer to computer from paper and all that. One of the pieces I found was a display ad, in the Jersey City Reporter, from the “Crusade to Save St. Lucy’s Shrine of St. Jude Committee,” which lists “St. Jude Lane.” However, in my brief conversations with folks who witnessed the 1986 events, no one remembers a sign and in fact, insists that there wasn’t a sign. I could have probed further, and perhaps I will—I am just curious what sort of wording was used in the proclamation to rename the block. One of the traditions of Saint Jude, the patron of lost causes, is that when a prayer is answered, tribute should be paid. That’s why in the classified sections of newspaper you will see ads of the Saint Jude Prayer. In thanksgiving, one pays tribute to the devotion. For the time being, I like to think this street sign was a politician urged to pay tribute to the saint, as well as to the people who fought to keep the church open and more than half century tradition alive at the place it started (it is still going on Saint Michaels, where the “inside” shrine is located. 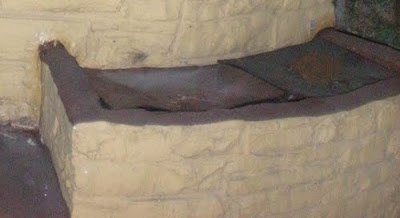 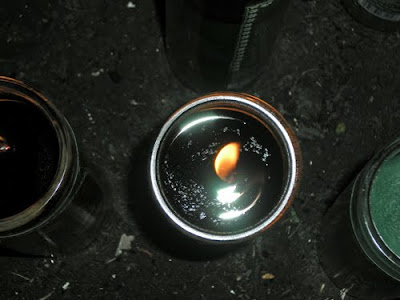 In front of the base of the statue are metal boxes. I lifted the lids. Inside were candles. Burning. Someone made the boxes with sufficient ventilation so candles can burn, but the flames were not extinguished by the wind. The box was clearly built or modified for this purpose, to house and protect devotional candles. The official novena may be elsewhere, but somebody is still praying at this Saint Jude Statue. 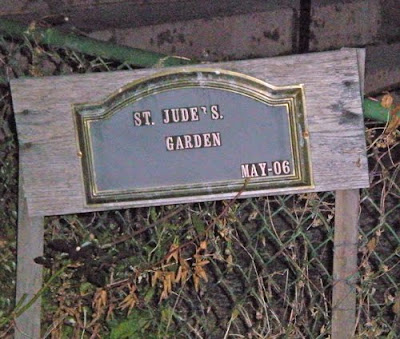 The property is still owned by the Archdiocese even though the church is fallow and no longer sanctified. Then there’s inconspicuous plaque, St. Jude’s Garden, with 06—is that the date, I wonder, when the Garden was first planted? Or named? Is the name official? The Garden is simple, but apparently well tended. Is this all volunteer, who paid for the plaque, the city or the archdioceses or a private donor. Is this under the auspices with approval of the Archdioceses? I find it all very curious, but I don’t really want to act on this curiosity, at least for now. All these clues indicate that a spiritual practice is taking place and it’s easy to understand why, St. Jude is a powerful Catholic icon, has been for centuries. Who is doing it, how it is funded, is there a connection to the events surrounding the closure of the church 20 years ago? The answers may be interesting, but why mess with somebody’s faith? Acting on that curiosity would simply impose and intrude on somebody’s private spirituality. 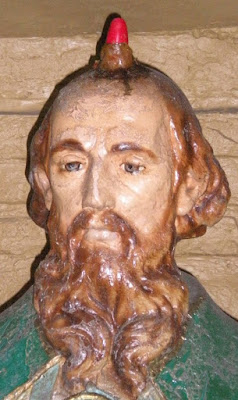 St. Jude, one of the apostles, was a cousin of Jesus. The statue has the classic depiction, resembling familiar iconic images of Jesus Christ, but older. The pointy thing above his head is the Holy Spirit, the tongues of fire that appeared above the heads of the 12 Apostles on the Pentecost. 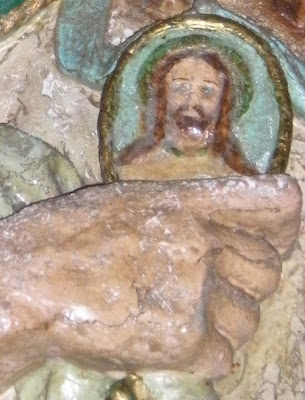 His hand holds a Mandylion. a miniature image of Christ. According to Eusebius, a Greek Christian Historian, in his work, “Ecclesiastical History,” King Abgar of Edessa (which is now in Turkey). on hearing of Jesus’ miracles, sent an envoy to Jesus. Abgar had leprosy. Supposedly, Jesus pressed his face to a cloth, impressing on it his visage, and Jude brought it back to the king. Other versions, apparently, according to the book, “Jude – A Pilgrimage to the Saint of Last Resort,” by Liz Trotta, have been around and involve paintings of an image of Christ, but not the face in the cloth bit. After the Pentecost, according to Eusebius, Jude did travel to King Agbar of Edessa and cured him of Leprosy. Jude also traveled to Persia, Armenia—were he is credited with founding the first national church, Syria and Lebanon, where he was martyred by being beaten with clubs, which is why he depicted holding a stick. 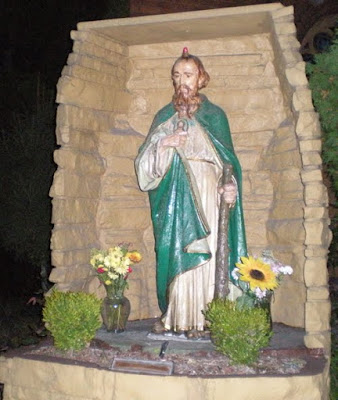