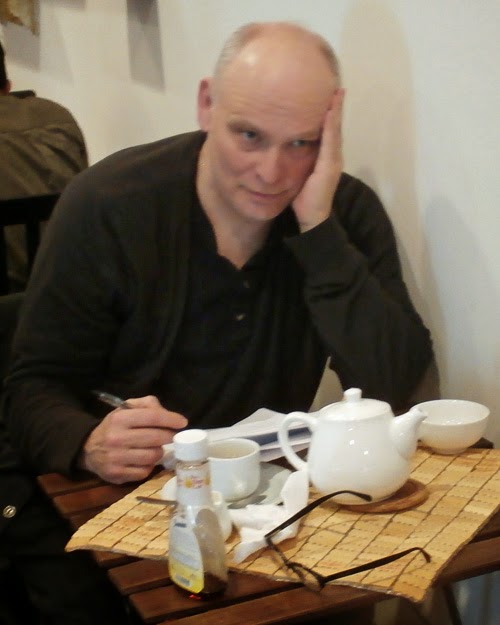 
As is tradition, I reflect on the year of blogging on this the anniversary of Dislocations.

I apologize for the typos, I can’t afford a copy editor. I also appreciate the kind words, encouragement and compliments I’ve gotten in person and by email. I’m not sure exactly what service Dislocations actually provides, but it’s good to receive genuine appreciation. Originality and depth is something I strive towards and it’s nice to both have that acknowledged and to know that many appreciate such aspirations. Last year I passed 100,000 vistors or readers or however the blog-stats are interpreted.


God Bless you all


This may be the last one, by the way.


I do not want to make such a grand statement – because, really, who knows how one will feel come any given morning – and it’s not that any hiatus is being planned – but the fact of the matter is that that each year I’ve written fewer blogs posts. This feeling has been nagging me, that maybe I’ve to the end of the blog format. Things I feel like writing about now, ideas that are coming, do not lend themselves to Dislocations posts.


Maybe blog notions will come again. Maybe I’ll just do pictures with funny captions, or maybe start another blog with a different mission than Dislocations. People have said to me, I love your blog about Jersey City. I thank them, but this blog was never really about our isthmus, it’s just mainly set in Jersey City. Ultimately, my statement is about the human condition, our experience of mortality, how we reconcile the need for community with our limited ability of understanding – we really can know nothing other than the self. Indirectly though, maybe it is about Jersey City, and maybe I do not have much else to say, especially about what fascinates me the most, ordinary life. Noticing anew things we experience every day. It’s those moments, the ones we hold in common, that I fnd the most revelatory. That keeps me going, gets me through.


Maybe I no longer feel the same Dislocation that inspired me five years ago to launch this endeavor.

Without a doubt, the most fateful blog (s) was a pair I wrote about White Eagle Hall. Turns out, they were so well-received by the principals have asked me to work for Jersey City Theater Center, the organization creating a Theater & Arts complex in this neck of Newark Avenue. It’s very exciting and I’ve become their quasi-chronicler as well as publicist and general writer.


Basically though, I had been passing the four heads on this building near-daily for so long I had to find out who they were. The research was fun and included input from the Association of American Polish Historians, and the blogs formed the basis of an academic article available here.


A great place that serves both great tea and is a great drink that great tea opened, but this blog was a reason to write a memoir pieceabout why I never drink coffee, thus have devoted my hot (and sometimes iced) caffeinated beverage life to the leaf.


Always a favorite,  myfavorite reads, the best books of 2013, the most subjective reading list ever-committed to the internet.


A bad fire on Grove Street led to these empty lots and some memorable ponderings.

Jersey City got a new mayor this year, don’t you know. Steve Fulop, nice guy, fast talker, one of the leading young democratic politicians who are exemplifying that generation X is now taking the reigns of power. His inauguration was a city-wide block party, and his man of the people rhetoric struck a chord, and a pre-GWB-Gate Christie showed why his appeal is wider in person than on TV or YouTube. Is Fulop Bloomberg or DiBlasio or is it enough for the majority of the newly arrived that he isn’t Healy? But Fulop already performed a historical task no other media outlet deemed fit to acknowledge – Jersey City’s firstJewish Mayor – his family are Holocaust Survivors – lit the city Menorah. In the 1990s, Jersey City became the test case that led to permitting municipal governments to exhibit holiday decorations.  Nobody else appreciated the multi-layered irony of this moment.


Murals have become the cornerstone of the art scene in Jersey City and some special city funding implemented a mural project, here are two examples, here and here, of some of the most compelling.


One of the greatest record stores in the history of record stores closed, JR Music, which is by the World Trade Center, downsized last year and will probably close this year. I happen to go to the old, two-level location on Record Store Day last year, the last Record Store Day of the oldlocation, whoo hoo! JR is a series of stores that sells appliances, electronic equipment, computers and CDs, but now that series has been consolidated into one brick and mortar store. I bought a couple of CD players there, recently a computer monitor. But they too are moving their selection online. Kind of sucks if your mouse decides to go kaput and you’re on deadline; I remember going there and finding a dozen different types of mouse to purchase. Now there’s one. Used to go to the record store, buy some CDs – they had a deep inventory and were really cheap –I got a Roy Acuff for $4.95! – but now everything is one location, they phased out the jazz selection. I get the feeling they are selling off the rest of the stock and that will be day. A way of life gone forever. This blog was not intended to be but turned out as both tribute and obituary.


I love writing about Shakespeare and I caught some really fantastic summer productions, a really great King Lear up in Inwood, so far up the isle of Manhatto that my nose bled. A good buddy, Bob Armstrong, played the titular role of the man who usurped his life. On the Jersey Side, the Hudson Shakespeare Company presented the rarely performed Henry VIII – not the Bard’s best history, but this production made me realize how it is a significant footnote to the Henriad and its two Richard bookends. The same group later presented a remarkable interpretation of Macbeth and in October, presented Titus Andronicus in a cemetery production. I love Titus, and while I quibble with the black-comic interpretation, this was a very satisfying Titus.

My music obituaries are part-memoir. Musical tastes – what makes up our own personal soundtrack and how that soundtrack changes as we follow our journey through life – is an area of interest for me. Why we listen being as important as what we listen to is an idea I keep coming back to even. RayManzerak and Lou Reed provoked a reverie and Pete Seeger’s passing invoked a memory of my interviewing this friendly great man when I was in College, and I was writing it up, I had insight into his momentary bizarre behavior, something about Phil Ochs.


He may not have died this year, but the Cohen Brothers released that film based on his life and his being in the news sparked a memoryof Dave Von Ronk.


At the Exchange Place Starbucks, I witnessed a guy proposingto a gal. It was sweet and romantic and she said yes.


Dislocations revived my interest in photography as a hobby. I take pictures and think of funny or interesting at least, captions. A puddleforms in this lot after every rain. When the light is right, the puddle reflects our world back to us. This lot was paved over a few months later. The grass is gone, but the puddle still forms and the reflection return.


Another down time there by the dock, got a good shot of aguy catching a flounder.


The place to be come mid-August is Sixth Street for The Feast. This year I “covered” some of the processions and other events as well as the evening bacchanals.


Winter. We just got through a doozy. I happen to be in the New Jersey Room at the main branch of our public library on a day of a real bad snow storm and a great shot of Van Vorst Park. Then I walked through the unblemished snow of the park, wondering about the illusion of infinite, icywhiteness.


Local artist, Kayt Hester, works in tape and celebrated the 7-year-return of the Cicada at a special show. A few months later, she had agallery show in NYC, but this space had large glass walls that Kayt had some fun with, messing with our perception of what is 3-D.


Living in Jersey City, warm-weather festivals are a way of life. You see family and friends and neighbors and have some fun and eat food you only eat once a year. The Santa Cruzan festival, a Filipino party, at the end of May, kicks off the season. The 2014 edition – the 35th – was really fun. Jersey City has one of the largest populations of Filipino Americans in the country. What a blessing. What a fine bunch of folks.


I’m a film-buff. A cineaste. I’ve been seriously studyingthe western – by which I mean, I’ve  seen a ton of them and watch many several times. The genre’s best decade is the 1950s, and here’s a list of some more obscure Westerns that are noteworthy. If you haven’t seen The Searchers or Seven Men From Now, watch those agreed upon classics first and then you’ll be ready to appreciate the greatness of the american film-making these 10 films achieve.

Here’s another piece of news, about newspapers, you will only find out about on Dislocations. The Jersey Journal moved their offices to Secaucus, and bequeathed more than a dozen metal filing cabinets of a meticulously kept clip file to the Jersey Room at the Main Branch of the Jersey City Library. You want to see the history of Hudson County, get a feel of what was important in the daily life, thus get an authentic peak into an area, spend some time with these unique files.
Stephanie Riggi’s work I’ve seen around but I never had the pleasure of meeting this artist until last year.  Her illustrations are vivid and twisted, and she possesses one of the brightest pallets in town


Luca Casulito is a real go-getter in Jersey City, involved with the arts and her own business. But she also happened upon this process of creating this somewhat bizarre, but very moody and provocative abstract pieces, art objects. She’s always interesting to talk to, but talking about her art is a rarity. There’s a freshness and originally in her abstractions worth noting.


The 313 Gallery is a permanent gallery, meaning they are not a bar and have regular hours – albeit only on weekends – and that is rare and perhaps a first. Also it’s a really interesting space, whose history you can only read about here, and this show featured Bunny Pearlman, whose diverse array included water colors and found art.


Eva – this a German pop artist – had a wonderful show at the now defunct, gone but not forgotten, Fish with Braids gallery.


Art Activates is a mural project for alleys. This was fun to write. I not only wanted to report on this unique, urban beautification project as well as the really fantastic art that has been erected on these rarely seen surfaces, but I tried to convey the experience of seeing this art unfold as you stroll through the alley.


Here’s some wonderful religious statuary I saw in Clifton.
Some thoughts about missing cigarettes.


Saint Jude Thaddeus Pray For us.
Thanks Everybody. See Ya on down the line,