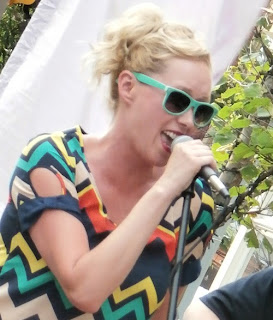 In a multi-hued, rainbow primitive print blouse, knee-length denim shorts and Day-Glo teal Ray Bans, Kelly Saint Patrick looked like a summer dream: hot, blonde, and ready for action. She seemed to be hopping around, twitching with excitement, anxious to get behind the microphone and start the show.

Why did her anticipation reveal such an abundance of nervous energy?

Not only was this her first Groove on Grove appearance in three years – documented here – this specific 2013 date had been postponed due to rain. Rolling Thunder Storms had been forecasted again, threatening to cancel the rescheduled event – the rare Friday incarnation of the Jersey City summer concert series. As afternoon turned into evening, the sky cleared. Mother Nature called off her monsoon. The show would go on. Realizing this, Kelly Saint Patrick was just about bursting with elation to be returning to the GOG stage. 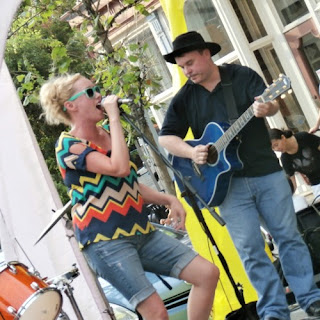 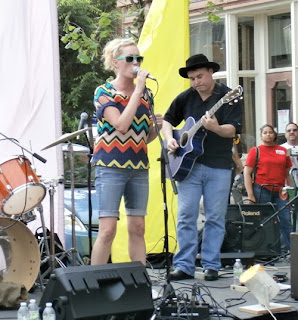 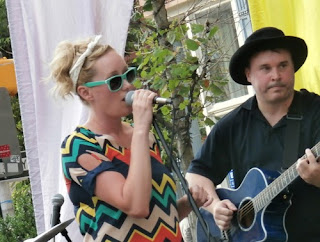 Kelly released her second album, The Light Keeper, earlier in the year and to anyone who knows her work, it is apparent she his reaching new creative peaks. Her sultry voice, warm and robust, is not just hitting the right notes but enwrapping those syllables with the confidence of a time-tested singer, layering fresh shadings into her lyrics.  Love is her subject; the emotional stakes are high and heartbreak is rarely avoided. This kind of music – and at this level – takes both heart and soul to make ... and to appreciate.

Everyone felt her energy. The band was in high sprits, a unique sextet – two fiddles, a cello plus key board, drums and guitar. They were funkier than any band with a cello instead of electric bass has any right to be. The string section trio gave the sound a textural complexity – it was folk rock with a distinctly country edge, but notably accented by a gypsy sensibility. The result was a compelling acoustic mesh, as if they were preparting to write a new chapter for the Americana sound.  A back-up singer supplied supportive echoes, depth-inducing harmony and  the occasional duet.

Kelly and her crew were having lots of fun. They had stop-on-a-dime tightness and delivered the hooks home for all they were worth.

The set consisted of Kelly’s original, 21st century folk-rock torch songs, and some  cleverly chosen covers, including a rocked-out (to hear two fiddles and cello rock out is surprisingly sublime) interpretation of Lucinda Williams Can’t Let Go and a rousing yet tender reading of Same Old You, by Miranda Lambert. Kelly brought on the sass with Hell On High Heels (I'm hell on high heels, baby I'm comin' for you), a contemporary feminist anthem that had an in-your-face, somewhat raunchy sexuality– an edgy ode to your inner gold digger. I was unfamiliar with the song; Kelly’s rendition suggested a Gurrrls gone country wild update of Reba McEntire’s Fancy.

In a few short years, Groove on Grove has established itself as part of the Jersey City life. Warm weather Wednesdays (and occasional Fridays) with open-air live music – three acts with sets of about 45 minutes each – have become the way it is here in town. We look forward to GOG and get annoyed when inclement weather postpones this pleasure.

Food Trucks and other vendors… friends and neighbors and kids – the melding of GOG with Creative Grove increased the crowds, but organizers of both events have told me that the 2013 seasons are breaking attendance records. More people in town as well as nearby towns  are coming and those who came are now coming back.  There’s a lot of milling about and chatter. The music becomes a sound track to this manifestation of community, great for us but for the musicians, it’s a tough gig, especially for an artist like Kelly. Her music explores an emotional territory – the romantic regions of the human heart – and requires an intimacy with the audience that can be difficult  to sustain amid the bustle of the Grove Street PATH Plaza.

Her showmanship talents compensated for the innate distractions of the setting. She was in great voice, emotive yet subtle – and the band was having a hot set throughout. But just as I was thinking that some of the poignancy of her songs was getting overlooked, a remarkable concert moment occurred with the pairing of two recent, original, and darker songs – Bottle of Wine, followed by, How Bad is Bad.

Bottle of Wine, a countryish ballad, is a genuine weeper, where the narrator (“tonight it is just me, a bottle of wine, and your ghost”), waiting for the time – “you find your way back to me.” A similar theme of longing and regret but without the relief of a tongue in cheek attitude carried into How Bad is Bad, an emo-styled rocker – dramatic pauses between blistering rave-ups.  A bad hurt has been inflicted and the singer is measuring the damage, as in, we know it’s bad, but how bad (how bad is bad). Can the love be repaired? We’ve all been there. Does this relationship have any hope, which is really another way of asking, how authentic were our feelings (which implies the darker query: were mine more genuine than yours?).

The narrator is nearly devestated when she realizes how much she misses him: “I’ve been bleeding since you left me,” and is left with only unanswered ponderables: “how bad is bad, can you handle me or are you too far gone for forgiving.” (dig those internal, alliterative rhymes at the end of that line).

Even though she concedes that her actions require forgiveness, her penance includes the challenge: “Are you too damn proud to see, me?” Her heart is fragile; the woman is anything but. 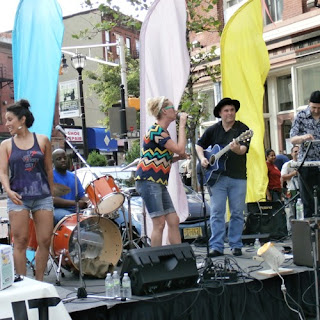 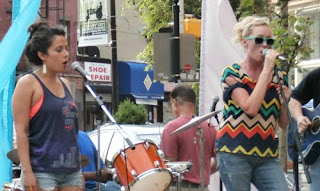 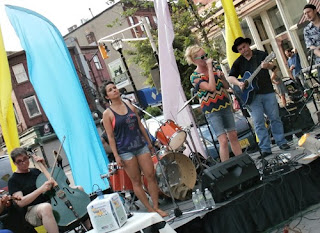 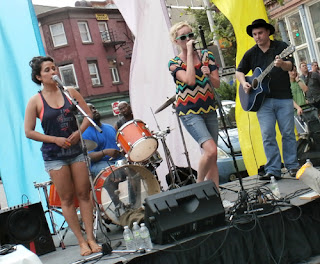 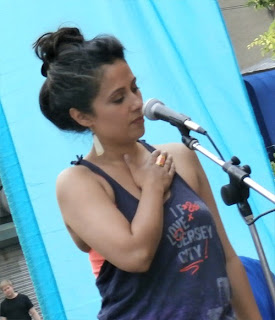 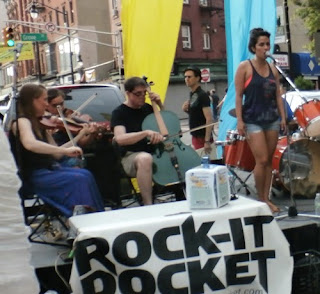 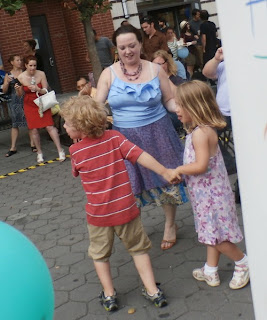 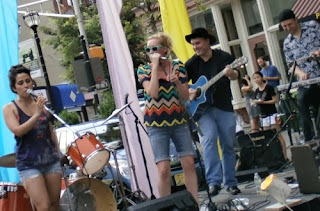 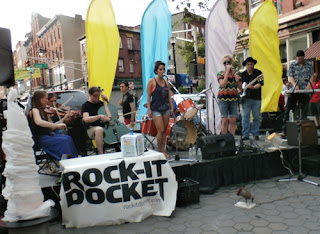 Kelly fearlessly exposes her sorrow, but she doesn’t wallow in despair. The dark night of her soul journeys towards the deeper truths one needs to survive heartache. Her vocal on How Bad is Bad was relentless, adding layer upon expressive layer as she approached the crescendo. She has a startling way of interspersing high notes when you least expect them, sonic counter-points more familiar to contemporary R&B than her post-Lilith Fair folk-rock leanings, which only makes her singing more captivating. The people who had gathered around the platform ignored all the typical GOG distractions. Kelly enthralled us. For a few moments at least, her honesty silenced the din. Following the song’s carthisis-like conclusion, there was a pause before the applause, as if everyone needed to take a collective breath. Kelly slipped the fingers of one hand behind her sunglass to wipe tears from her eyes. She whispered into the microphone, “I guess that one still hurts.”

Bob Dylan once said he wrote the songs to perform the songs. The impact of the autobiographical roots of a song diminish with time for the performer, but  maybe sometimes they return, maybe sometimes the feelings of the song and the feelings of the singer again coincide (or at least appear to). Her performance and her reaction to its intensity was a rare – and profound – display of sincerity that can only be described as brave. We recognized our feelings in her lyrics, then she gave voice to those feelings. It was a singular and unforgettable moment. Life turned into art.

Dancing Tony, promoter, booker and MC, came on stage to take the mike and thank Kelly& Company. The applause and cat-calls still lingered. We expected Tony to announce upcoming gigs of the artist and plug the Groove on Grove sponsors. He does this after the last song of every set. Instead, a rare thing happened – a breaking of GOG protocol – Tony requested one more song. His idea met with applause and the crowd’s unabashed approval. Yes, an actual encore. Because of time constraints – three bands, each requiring their own set up – and strict city ordinances limiting the length of the event – encores are the very rare exception at this JC weekly music-fest. But sometimes the performance makes no other option acceptable. Kelly invoked feelings we all shared and we needed them to last at least one song longer. 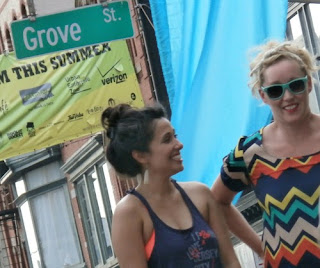 My only complaint is that no one intrdouced the band!
Website: kellysaintpatrick.com
Posted by Mr. Tim Hrk at 6:20 PM