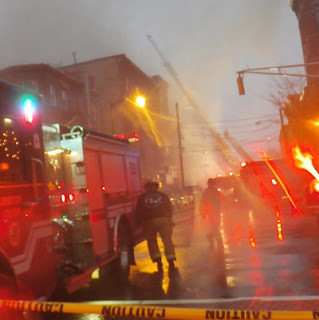 We all remember the Grove Street fire. It was only a month ago.

The fire was under investigation said the newspapers then, but still no answers yet or even informed speculation as to the fire’s cause. No lives were lost, the causalities were minor.  Tomorrow came then came again.

The buildings were  wood framed structures, more than a hundred years old. Papers did say the low hanging electric wires might have caused some delay in fire fighters battling the flames, but were unlikely a factor in terms of outcome. 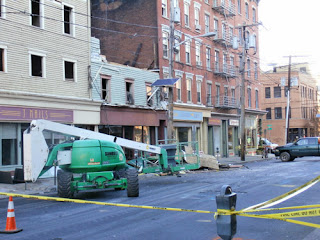 What was here now gone. That’s the fact and the truth.

Now we have emptiness, but for a while, we had rubble.

The fire happened the day before Thanksgiving. The fire took out two buildings. 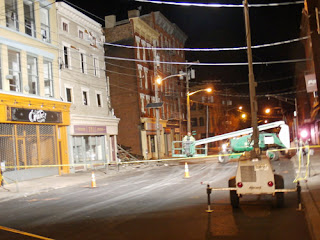 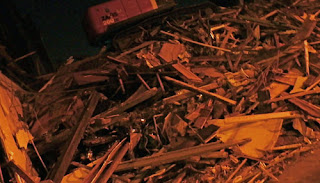 Rubble remained for weeks. Yuletide decorations went up, Advent came, we ran our holiday errands as we went about our lives, and the shards and remnants became the background to which we grew accustomed. Rubble reminding us but what did it remind us of – the buildings, the homes, the pizza parlor, the nail salon or the fire that turned places into debris? 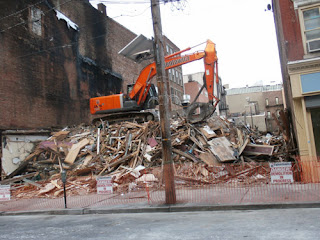 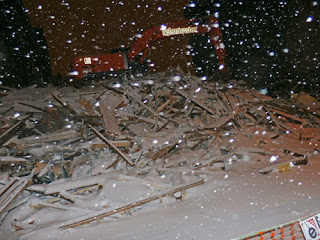 The city is the background to our lives. The scenery bringing comfort, symbolizing stability, showing us place. The city is the setting that verifies our individual existence.

There will be a new building here, how can there not be? Jersey City is the in-demand town, a development hot bed. A new background. (probably condos) will eventually rise to fill our eye sight and our subconscious.

But now our background is emptiness... just a lot of … dirt waiting construction like prehistoric protoplasm waiting evolution so it can crawl from  the sea.

I wonder how long it’s been since emptiness last defined this lot. 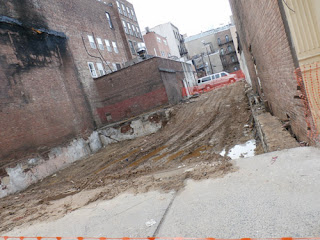 If the buildings that burned were a hundred years old, they probably replaced other structures, Grove being a major thoroughfare since the founding of Jersey City.

How old is the dirt? Was it trucked in to make this foundation or is it Jersey City soil that has been here since the ice age melted away?
Will we remember the dirt or the rubble when new buildings are constructed here? Will we then or do we even now remember  the buildings that were here before, for so long, that we took them for granted as our everlasting background.  But even ever will not last for ever. I can’t remember what the businesses were that were here before the nail salon and pizza parlor, even though those now gone occupants were barely a decade old.

Maybe it’s not what was destroyed nor the aftermath of that destruction that we will remember. Maybe we remember only the fire.

All fires are not inevitable, but once started the next moment can not be prevented. The next moment begins a new inevitability where the final result, empty lot, waiting dirt, cannot be escaped or denied.
Now, seeing this empty lot makes one feel like an amnesia victim struggling to make sense of incomplete memories.

Past images vague … is that where I had that great calzone or the friendly mani-pedi? Before they were gone, you were certain but now there’s a new doubt. That place you are thinking of may have been on another block. What was here and what you used to do that you only could do here is suddenly fuzzy because the identifiable landmarks have been transformed into emptiness and your memory is confused between the before and the fire and the present emptiness that the fire created out of that now distant before. 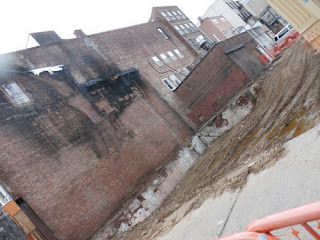 Change is the constant in all our lives. City dwellers daily play a mental  game of what used to be here. Store fronts stay but the businesses they host often switch every few  years and everyone lives here long enough to eventually and constantly wonder what used to be here.

Some memories are blurry, others stay vivid and form anecdotes you tell all the time and if you have considerate friends they won’t say they’ve heard that one before.

Black ash forms a shadow on the bricks of an adjacent building.  A film of soot that looks like a crescent and cloud, a tattoo left by what was here that was turned into smoke to rise and disappear. The stain is black as ink. If you did not know what was here, this remnant of ash tells you nothing. It only implies the tragic cause of the emptiness. 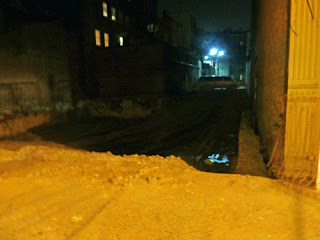 The emptiness of the lot is a cavity gaping in our minds, unconnected  to the past or the future, an interruption of our reverie as we pass the once recognizable background of our day-to-day.

The emptiness is the inescapable void of the present. Something that should be here is no longer because of tragedy and like the present we move on to the next moment, we move faster than our memories. We confront the void but keep it brief. We avoid not fear but if we tarry in the emptiness we might see how much of our self it resembles. When we walk this stretch of Grove Street, our pace unconsciously quickens.

The past is not fully remembered, the future not yet envisioned. The emptiness is new, but it is all we have now and feels strangely familiar,a flash of déjà vu, a fate we are compelled to postpone. 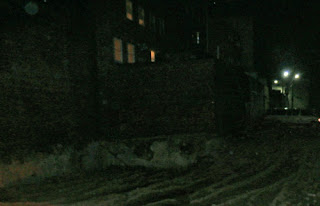