Any Day Parade: Groove on Grove 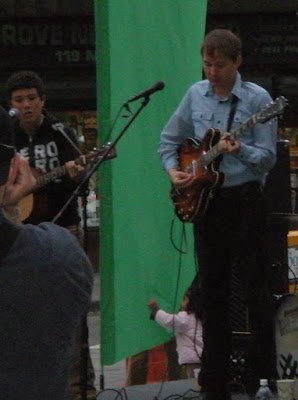 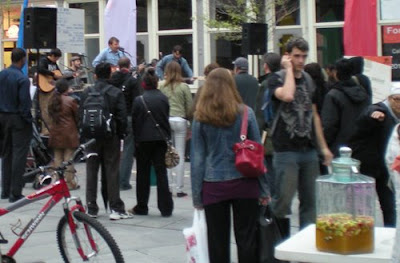 The weather felt more like March than May for the first Groove on Grove of the year, but hometown heroes Any Day Parade heated up the stage. During the warm weather months, from approximately 6-to-8 pm, musicians perform at the pavilion surrounding the Grove Street Path Station. One of the better ideas Jersey City has come up with, this weekly concert series has a fun, block party vibe. Alongside the cluster of fans and music lovers, there’s commuters and pedestrians passing through, vendors selling snacks & beverages, politicians and others handing out handbills, blue & white collar workers hanging out after their day at the job and parents with their kids who were running around and having fun. Probably not the easiest gig for the musicians, since the attentive audience is outnumbered by all the other commotion, not to mention the ever-present potential of uncooperative weather—the cloudy skies threatened rain and the chilly, damp breeze was increasing. Any Day Parade marched on though, playing with intelligence and wit, delivering a highly entertaining set that started off with a snaky blues song then moved through several rip it up country rock songs and ended with a blues-driven, emo-styled breakdown. I caught the band last year at the Grove-fest and have been hooked to their romantic lyrics and tasteful explorations of country and rock & roll ever since. Catching them live has always been worth the effort. They debuted several new tunes (they were new to me at least) and I was able to pick up their second CD, Where We Fall (which is awesome!). The singing and the playing was noticeably better than when I saw them earlier this year. The guitarist J.D. Daly reeled off stunning leads like he just got back from the cross- roads. My favorite song of the set, that I believe was introduced as “So Long,” was this up-tempo rave sung by the other guitarist, Larry J. Brinkman, that echoed Credence in their prime. “Where We Fall,” the title track of their 4-song CD (EP/CD) is a honky tonk grunge tune, a snippet of the lyric stuck in my mind— “love sure ain’t cheap, and lust sure ain’t free.” Introduced as a song they hadn’t recorded yet was a tender folk melody, sung with sweet feeling by Tree. Then a couple of songs later, the concluding crashing crescendo of “If I Stay Too Long.” The band turned on a dime and jammed up this powerful ruckus, with the interplay between the bass and drummer proving the intent was more free-jazz than noise. Tree delivered a searing, soulful caterwaul—only a few minutes ago she sang a lullaby, amazing. Set lasted about 45 minutes and the Any Day Parade train stopped at several stations of Americana. Genuine musical talent, truly inspired songs and a mix of genres few can pull off. And, they keep getting better. They work in a realm of versatility with musical chops up to that task. This band is the real deal and Jersey City is lucky to be their home. “I think we do better in a small bar where it’s dark, crowded and sweaty,” Brinkman told me when I went up to the band to congratulate them on their set. I can’t wait to go to that bar, but for now, Groove on Grove couldn’t have had a better 2009 inaugural.

vist: www.myspace.com/anydayparade
Posted by Mr. Tim Hrk at 5:34 AM